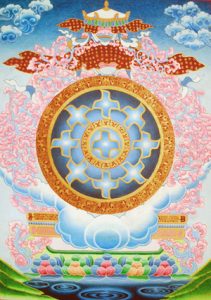 I went to India for the first time and stayed in Himalayas for few months and then went to Nepal. I saw many artists were drawing Buddhist paintings called Thanka. It is a miniature picture transmitted from Tibet, in a Thanka painting there are Buddhist stories and gods are drawn. Plenty of Thanka shops in Nepal.

I moved to Pokhara from Kathmandu and there were also many Thanka shops. There is a big lake and mountains there, and restaurants and souvenir shops are lined up the way along the lake. I went around many shops and talked with painters, then decided one shop to paint in that style.

The teacher was still about 20 years old at the time, but both his father and brother were Thanka painters. I asked him to learn techniques and painted my own painting. At first we bound a cloth to a frame and fix it. Then we melted dried pieces of sebum of yak which is an animal live in Tibet and applied it to the cloth, then it became a canvas.

What is difficult in Thanka is a gradation part, using thin brush tip and draw small dots as well as making a tattoo. It is a work that you can draw as finely as you want. If you look at a gradation part, you will immediately find out how carefully it is drawn.

It seemed to be a bit frustrating on the way, but while I was encouraged by the teacher, I spent all the rainy season in there. It reminds me a heavy rain in the middle of the night and a big choir of frogs. The middle part of the painting was the symbols of eight eagles arranged in a circle, which I designed in the summer of 2000 in Tokyo.

Go to the next page ”Before the journey”